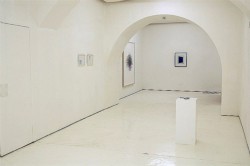 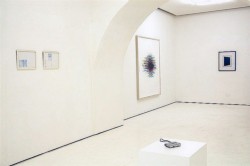 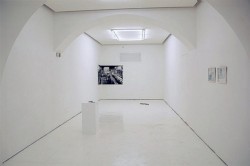 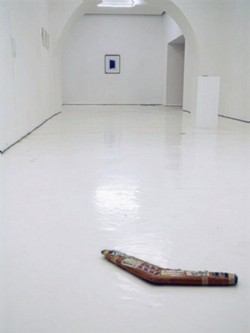 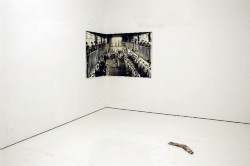 Galleria Tiziana Di Caro is delighted to announce The Mousetrap or Something old something new something borrowed something blue, a group exhibition curated by Chris Sharp, Thursday 3 June 2010 at 19.00.

This exhibition borrows its double title from Hamlet and an early work by Lawrence Weiner. Referring to the play within the play, the mise-en-abyme (conceived and named "The Mousetrap" by Hamlet himself) and a moment in conceptual art where art becomes a nonnarrative form of language, The Mousetrap or Something old something new something borrowed something blue is a reflection on the narrative capacity of self-reflexive or tautological art. The exhibition pits a small selection of historical conceptualists such as Keith Arnatt, William Anastasi and Christine Kozlov against a younger generation of artists including Nina Beier, Etienne Chambaud, Alexander Gutke, Wolf von Kries and Kate Owens, contrasting the differences between their use of such strategies. Where Arnatt, Anastasi, and Kozlov often sought to eliminate narrative as much as possible from their work, Beier, Chambaud, Gutke, von Kries and Owens use techniques as inaugurated by those same artists toward more narrative ends.

The complexity and directness of these tales of course varies, ranging from sublimated forms of story telling to more evocative and expansive moments. Nina Beier's Framing Paint, Painting, Picture (2010) for instance relays the story of its own absence and systematic exposure as well as its literal and figurative withdrawal. This piece consists of a photo of a blue, monochrome wall painting, originally painted behind another two-dimensional work on a wall. Each time the artist exhibits this work, she re-photographs it such that it becomes systematically smaller, thus receding into itself and telling the tale of its own exposure. Self-reflexivity and the mise-enabyme in this case take on an allegorical significance, literalizing the attrition that attends familiarity. Meanwhile other works in the exhibition, such as Wolf von Kries Boomerang, speak to a more far flung sense of narrative. For this work, von Kries sent a boomerang through the mail to a fictional address in Sydney, Australia, at which point, finding no recipient or correct address, the boomerang obediently made its return journey half way back across the world to the artist in Berlin. As such, this piece becomes a metaphor for the suppression and return of narrative in post-war Western art. Like the arc symbolically described in this exhibition, it serves to reminds us that whether we like or not, stories will always be an essential, if evasive, part of art.

Thanks to Galerie Croy Nielsen, Emilio Mazzoli, Galerija Gregor Podnar and all the artists