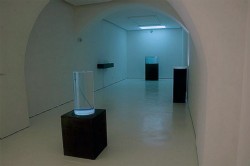 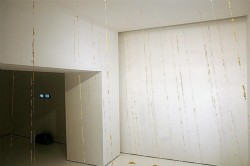 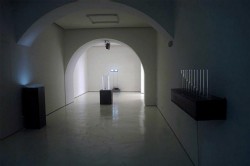 The exhibition includes a series of videos and installations, some of which were created in 2007, and some of which were exclusively realized during her stay in Salerno. Water is the fil rouge of these works, not only as an element for the sustenance of biological and spiritual life, but also as a metaphorical symbol. Water defines place in a fundamental way, and the project Bodies of Water comes from the proximity and particular intimacy that Salerno has with the sea. The project is both a result of observations and interpretations of water's undefined qualities as an element that is understood as such: "It has no form, yet it occupies space; thought it has volume; it cannot be held; it is colorless, but not invisible. It simply makes its presence known by altering the things it touches."

Susie J. Lee examines this metaphorical nature, giving life to works in which the ethereal aspects of video image and sound interact with the materiality of water. Thus, video projections, i.e. illusions which are configured as three-dimensional digital objects, intersect with sculptural elements in a minimal style. The spectator will face the ephemeral aspect of rain (Rain Shower), identify his / her states of mind "interpreted" by different states of water (Towards Entropy), and will recognize the temporal and ever-changing nature of wishing (Wishes Change; Wishing Changes You).

Her artistic expressions and themes derive from a heterogeneous academic training, connecting her background in biological sciences with an affinity for the communicative languages of art. Her understanding of science is rooted in her university studies where she received a degree in molecular biophysics and biochemistry at Yale University. Indeed, Susie J Lee’s artistic praxis has always been characterized by a careful methodology of experimentation and analysis, in which the artist tests different media—from video and sound, or paper and wood, to glass and water, as in the case of the works featured. The tactile sensitivity of the work can be linked to her background as a ceramicist; the artist received her Masters in the ceramics department at the University of Washington. The inclination towards the formal language of art has created a link between her interests to the extent that she explores, through artistic mediums, the border between the aesthetic motives of the image and its physical characteristics.