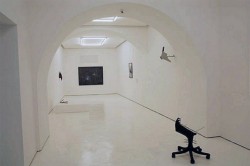 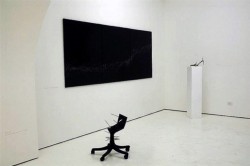 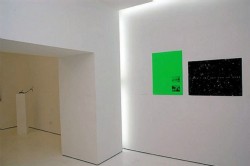 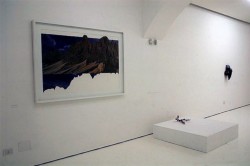 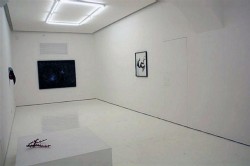 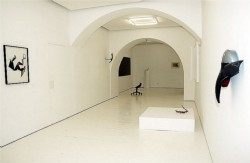 Stanislao Di Giugno's eclectic artistic output, also featuring a diversity of means, nevertheless sticks to one single aim: "to distort reality and the ordinary logical sense". Alessandro Piangiamore explores everyday ordinariness in order to alter its contents, "my work aims at eluding a direct reading of reality, thus reaching the viewer through other routes". The somewhat analogous and parallel paths followed by the two artists suggested presenting their work together at the gallery, playing with the meaning of 'Luogo comune' both as locus communis – common ground – a place of meeting and exchange, and as in its of meaning recurring, widely referred to and often obvious idea.

The exhibition includes an assortment of works by the two artists, such as sculptures, photographs, collages and pictures, in which the diverse formal datum aims at a single target: to draw from reality to modify its meaning and shapes. Stanislao Di Giugno displays a series of works based on assembling everyday objects to create abstract sculptures. The artist performs formal alterations which shifts meaning: through the re-use of car and motorbike scraps and pieces, he completely changes their original significance. Alessandro Piangiamore too starts from a real datum, i.e. 'matter', and plays with the ambiguity this can generate when altered, producing an inversion of meaning, so that, for example, coral items are transformed into wood and tree branches into coral.

The artists' points in common clearly show through in two wall works, both evoking the image of a constellation and its idea of infinity: in one work this is delivered through glitter shimmering on a dark background, in the other the effect is obtained through the white groves of a creased dark sheet of paper.

All in all, 'Luogo comune' is a common ground where the two artists compare their aptitudes and production, highlighting similarities and differences after individual elaboration.