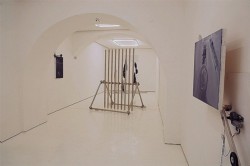 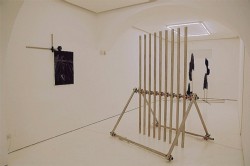 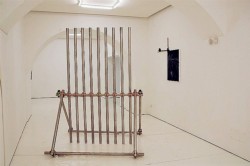 One year after Luogo Comune, a double solo exhibition together with Alessandro Piangiamore, Di Giugno finds himself again dealing with the gallery's rooms, with a work centred around a site-specific installation that explores the concept of "space" not as a means which brings together, but as an element which separates the work of art from the viewer, the latter being called to play the additional unconventional role of mentally and physically having to look for elements which are part of the exhibition.

The gallery's space is altered by a steel installation so imposing that it hampers the interpretation of other works. Thus, this structure is basically designed to obstruct the exhibition's route, making it unexpectedly awkward.
But Stanislao di Giugno does not only configure this work as a "physical barrier", as, in fact, he also seems to stimulate the hearing experience by introducing an audio device which changes its tone depending on people's movements. The result is a persistent and annoying sound which completes the installation by making it at once attracting and repelling.
With this work, Stanislao di Giugno once again subverts the parameters we normally use as reference points, setting off a process in which the gallery becomes its own paradox, i.e. not a place dedicated to a quiet contemplation of art anymore, but one which actually contrasts its fruition.
The viewer's will is strained to the limit, as in fact he is prevented on many levels from enjoying the artwork which, as always with di Giugno, tends to wreck the sense of logic by re-using ordinary symbols and objects in order to alter their formal and aesthetical contents. In this sense, collages and sculptures turn into obstacles between the viewer and reality, which is questioned through the alteration and reinterpretation of meanings.