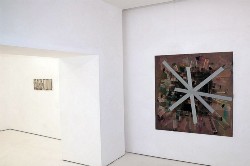 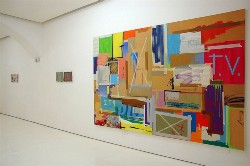 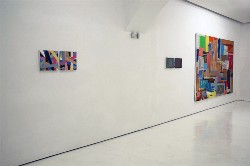 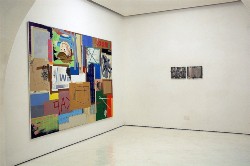 The exhibition will include a series of new pictures of different sizes, all produced between 2010 and 2011, which the Argentinean artist produced consciously and deliberately avoiding any pure theoretical standpoint, instead concentrating on technique and form. The artist's exploration of the theme of landscape which, although with great formal diversity, had marked his 2005-2009 production, gives now way to a total destructuring of form, a fragmentation of the idea, which develops through imposing but seemingly disarranged backgrounds, at once solid yet only outlined, which resume a fracture already evident in Reverse, the artist's first project hosted by the gallery in 2009, and which the new project only seems to reinforce.

In Praxis – Mimesis the idea the artist pursues and develops is that of "catastrophe", related to Gilles Deleuze thought, which is expressed through form rather than reason; on the contrary, the actual intellectual aspect elicits a reflection on unstable systems, which are demolished by an uncontainable power – the power of painting itself as a means of expression. In fact, Praxis – Mimesis refers to a modus operandi, which consists of repealing all the clichés which make up the universe of painting. To paraphrase Paul Klee and his "grey point", Pallavicini places himself on the border between "becoming and vanishing", between "being and nothingness", entering a completely new dimension of his work, in which the act of painting and the freedom in its managing are the absolute protagonists that also reflect the sense of emptiness typical of a society – ours – on the verge of chaos and folly.

Nicolás Pallavicini was born in Buenos Aires in 1976. Lives and works in Munich (Germany). Since the year 2000 works with the independent Rome based research group "Complot S.Y.S.tem" joining numerous international appointments including two Venice biennale of Architecture in 2006 and 2008. Besides the group held and organized a series of conferences and debates mostly in Italy and soon became well known as one of the most critical voices regarding arts, architecture and society in general. In 2005, invited by the "factory Berlin" in the German capital, elaborates the piece "Lezioni di pittura a Tora Bora" with dancer and performer Iker Filomarino. Curated by Antonio Arevalo participates to "Tramonto Latinoamericano" in a collateral event of the 51st Venice Biennale, was selected in 2006 by the G.A.I. for the exhibition "Arte&Sud" in Sicily, to end with his first big solo exhibition "Anatomia del Paesaggio" at the "Centro Cultural Borges" in Buenos Aires in December 2007. His first solo show at Galleria Tiziana Di Caro, "Reverse", was in 2009.
In 2010 Arte al Děa International reported Nicolás Pallavicini as one of the sixty most promising South American artists.