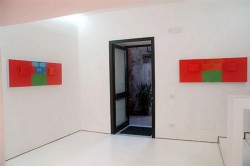 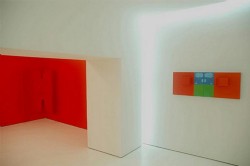 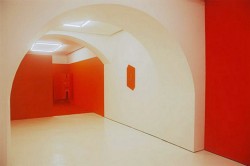 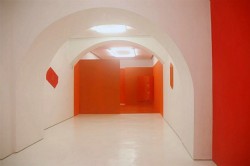 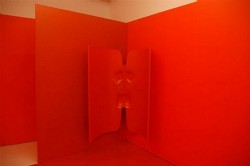 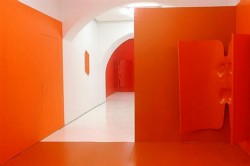 Galleria Tiziana Di Caro is pleased to launch the solo exhibition of the Galician artist Mónica Alonso, Calor, on Wednesday 18 of June from 19.00, in Via delle Botteghelle, 55, Salerno.

Mónica Alonso creates works that she defines "Espacios Terapeuticos" (therapeutic spaces), whose function is to locate and transplant the typical human pleasures and instincts in order to transform them in artistic pleasures, through a process named "Trasplantes basados en la localización de esencias e instintos en el ser humano" (Transplants based on the location of the essences and instincts of the human being). The instincts and the essences which she has developed until now are manifold, as love, fancy, beauty, pleasure, madness, the infinite, and suicide.
Since 2006, the field of research of Mónica Alonso is temperature and the incidence which its variations can have on the human psyche, with particular attention to the artistic events which derive from hot and cold.
The exhibition, Calor, includes a large architectural installation, a series of sculptures and drawings, which were created to suit the spaces of the gallery. Some installations will irradiate heat in the space of the gallery. The visitor will be able to enter the place and interact with the sculptures - three orange carcasses which trace the features of the human body - in order to actually live the experience of an extreme heat. The summer temperature of Southern Italy becomes a means and source of inspiration, which is essential for the conception of the project. Alonso creates a relation between real heat, which is experienced on the streets and outdoors, and artificial heat, which is produced by the sculptures in the gallery, a place with the maximum concentration of energy.
Since 2003, the artist works following a criteria invented by herself which she has named PEP, Potenciación Especial de Percepción (Special Perception Strengthening) which consists of "transforming exhibition locations in places of intense perception". This criterion gives life to the Salerno exhibition. Taking as its starting point Émile Durkheim’s theory, which became famous in 1897 with The Suicide, A Sociological Study (Le Suicide, étude de sociologie), according to which extreme temperatures nourish mental alienation, the artists has conceived a journey of analysis which sees in the exhibition Calor its first moment and will be followed by an experience which will finish with its extreme opposite: FRÍO.

The FRÍO project will take place in September 2008 at the SCQ Gallery of Santiago de Compostela.