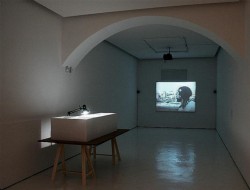 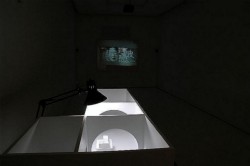 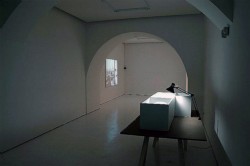 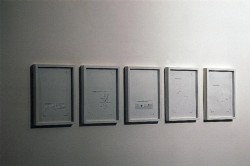 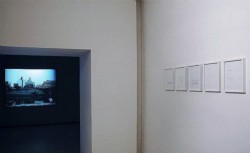 Galleria Tiziana Di Caro is delighted to announce "Haunted", a solo exhibition by Meris Angioletti, on Saturday 29 November 2008 at 19.00.

"There is an English verb, 'to haunt' and a French verb, 'hanter' which are closely related and more or less untranslatable in Spanish, they both describe what ghosts do to places and people they frequent or watch over or revisit; depending on the context, the first can also mean 'to bewitch', in the magical sense of he word, in the sense of 'enchantment', the etymology is uncertain, but it seems that both come from other verbs in Anglo-Saxon and Old French meaning 'to dwell', 'to inhabit', 'to live in' permanently." (Javier Marías, Tomorrow In The Battle Think On Me).

In analyzing the "Principle of Synchronicity" (1955), Gustav Jung and Wolfgang Pauli associate the lack of causality of certain psychological phenomena with some aspects of quantistic physics. On the basis of this relationship, Meris Angioletti makes use of various communication means, such as video, photography, writing, to create a device-exhibition where the various elements are connected in a non-linear fashion.

Haunted – video installation, involving a double projection of fixed images – follows two characters in their trips around the same places in Kyoto. Each of the two stories is accompanied by a monologue alternating descriptions of mind images to scientific explanations, transforming the experience of space into the experience of thought. The suggestion here is of a possible trip through time, involving a circular dimension and a science fiction background.
In the two photographs 133Cs, time is seen as a unit of measure established involving the Caesium atom and used in defining the duration of a second. The photos were taken in a mine on Elba Island, where pollucite, a mineral from which Caesium is extracted, was discovered.
Regular division of a volume is an installation created using the same principle of circularity and repetition adopted in Haunted: an ideally endless progression is created through a series of maquettes representing the gallery in 1:15, 1:150 and 1:1500 scales, placed one into an another, creating potentially endless progression. The exhibition is completed by three printings of footnotes which act as an appendix to the visual project.