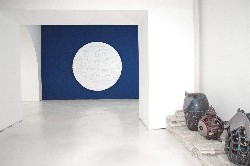 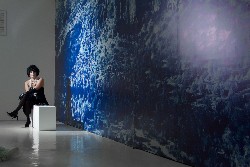 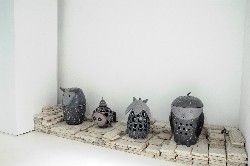 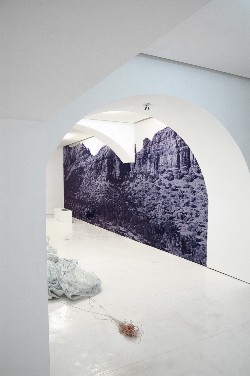 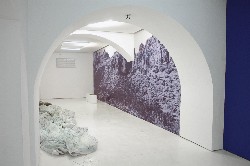 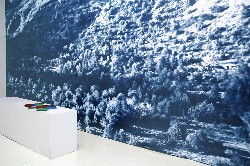 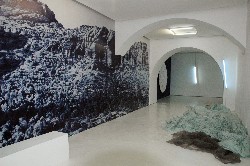 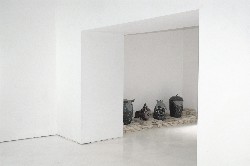 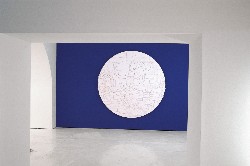 The works in the exhibition were created in 2013 and are the result of a journey made by the artist in Sedona, Arizona, in search of the elusive shelter where Max Ernst lived with Dorothea Tanning in the 1940s, and where he created some of his most important works.

Kemosabe is the nickname ironically given to Maxime Rossi by the person who accompanied him in this research, and which in the language of Native Americans means "reliable explorer". Kemosabe is, therefore, the artist himself who transforms the gallery by covering a portion of it with a giant wallpaper work (Blue Parrot Canyon, 2013), the reproduction of a cyanotype depicting the canyon’s area where the shelter is. Such is the majesty of the landscape that the architectural elements included in the image are lost, thus inviting the viewer to make an effort to locate them.
The canyon is the side scene in which four ceramic sculptures stand, figures partly austere, inspired by the shapes of some of the masks created by Ernst in Sedona, and partly grotesque as a result of strange associations: Pineapple Aries, Orange Bird, Pear Fish, Banana Rat.
A bas-relief, mostly made of paper, again reproduces a portion of a landscape, this time hinting at the third dimension and at the elements of a dwelling concealed by vegetation. Maxime Rossi keeps alluding to the hidden dwelling’s location, the presence of which is once again only whispered: the story is not told by people but by the places, utopian structures which suggest a presence.

On the occasion of the opening, a series of poems accompanies the visitor during the journey, with a vocal performance written by Rossi and played by Eddy Palescandolo that complements the obscurity of a story which is only barely alluded to, and made even more mysterious by the objects included in the exhibition path, whose shape, enriched with direct quotes from Victor Vasarely, lead to the quest for a meaning which within the bounds of the exhibition will never be revealed.