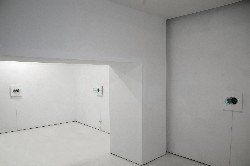 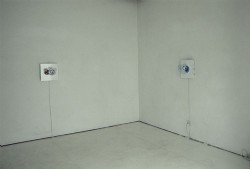 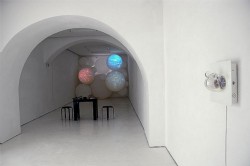 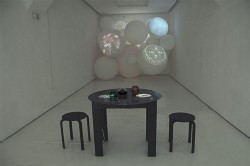 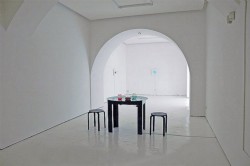 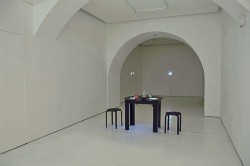 The exhibition will include a series of works the artist produced in 2011 exclusively for this event. Katja Loher's works focus on video-sculpture and video-installation, as could already be seen in her first solo exhibition at the gallery, in 2009, but her work is in constantly evolving, as are her videos, which become increasingly more complex. The latter feature dancing scenes shot with bird eye view, thus creating graphic signs which, with further elaboration, bring out the concealed questions through which the artist compels the viewer into an ethical debate.

The installation Multiverse consists of white weather-balloons of different sizes, three of them host video projections. The videos are based on live choreography featuring groups of dancers who become part of the machine in a synchronized movement. The tiny scale of the performers as seen from above provides an outside view, as though seen through a microscope.

Their movements tend to be synchronic and the bodies seen from the bird's-eye view that Loher adopts in virtually all her works form clear patterns, which she then proceeds to multiply kaleidoscopically in the course of digital post-production. The symmetrical multiplication of moving bodies in constantly changing constellations produces a rhythmically pulsating collective. The separation between inside and outside, which characterized the sculptures of the Miniverse series (2007-2010), is carried forth in the artist's new works called Bubbles, consisting of glass balls, looking inside which the viewer realizes that the three-dimensional structure is a shell feature three characters: the Master of Time (exceptionally interpreted by the American composer Philip Glass), the Master of Space, and the Master of Light, all committed in a quest to find solutions to preserve their worlds.

The exhibition is rounded off by a piece which anticipates the development of a new group of works: a set table invites the viewer to take a place, leading to the discovery that the objects on the table surface, i.e. bottles and glasses, conceal a virtual conversation between two human beings questioning each other about existence – a recurrent theme in Loher's work – which, in spite of the charming formal proposition of her works, represents the real core around which the Swiss artist's reflection revolves.