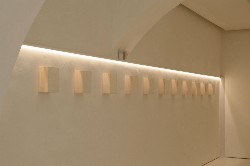 The exhibition focuses on a series of eleven works produced in 2014; specifically, these consist in lit boxes, which technically recall the lightbox, and are perfectly in line with the idea which Ivano Troisi has long chosen to focus on, i.e. the observation and the reworking of nature as a subject of study both theoretical and practical.

Handmade paper, in this case cotton paper, is Troisi’s main means, here explored in deep detail through a mechanism of light refraction that reveals its transparency. Unlike the lightbox, in which light emanates from the inside, here it comes from the outside and is filtered through a wood contraption that acts as a brace. The subjects recounted on paper and revealed by the light are seashells. These are presented in an elegant, formal dress which does not conceal but, on the contrary, emphasizes their meaning. These items, although common, have always generated great interest, holding a strange seductive power that is rarely found in objects. The seashell symbolizes Venus, the goddess of beauty and fertility, and in the past was used as a bargaining chip, and also as an architectural decorative element. It has long been associated with the cult of St. James and related pilgrimage, but also with the practice of ancient warriors, who used to keep them inside their armors as good luck charms. Nonetheless, as already pointed out several times, the attitude of Ivano Troisi is more akin to that of a scientist, for which in his work the seashell is primarily a biological structure, consisting mostly of calcium carbonate (CaCO3), which serves as a protection for some shellfish species. From a formal point of view, what strongly attracts the artist are the growth striae, i.e. those elements that distinguish one shell from another, thus characterizing their uniqueness.

The relationship between Ivano Troisi and the objects that inspire his research becomes at times physical, like in this case, in which the objects have become matrices for his etchings, and hence for his works. Along the exhibition path, the artist also presents the matrices themselves, i.e. the shells, which he gathered on the beach and which have become the subject of a personal experience that turns into a collective one. “Nature is one of the essential elements of my work. The recovery of the natural elements forms a link with tradition, techniques and languages born from the direct observation of the environment and the world. It is a sort of bridge between different disciplines, an attempt to establish a contact between a strictly experimental research and a research which is emotional, attitudinal, and empathic with the elements.” (Ivano Troisi)