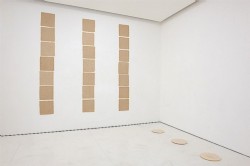 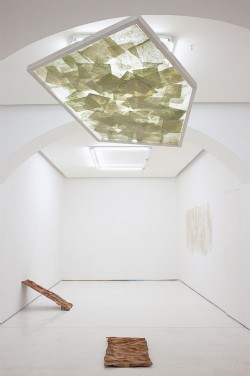 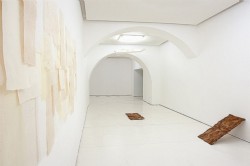 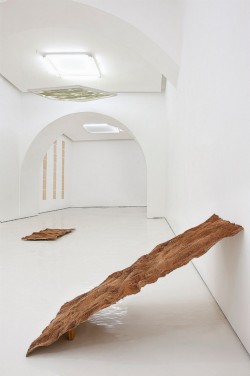 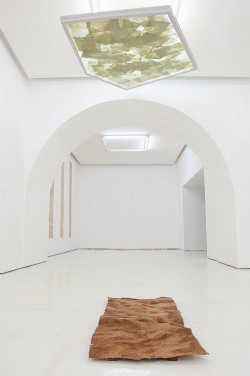 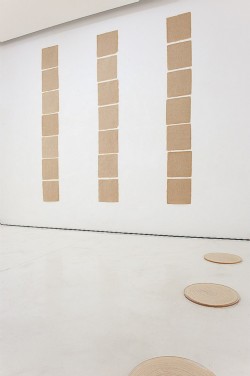 The exhibition project, designed specifically for the space in Via delle Botteghelle, includes drawings, sculptures and installations made almost exclusively with hand-made paper, using a method which is traditional but at the same time unique and exclusive.

The work of Ivano Troisi focuses on nature, which he analyses empirically during his recurrent trips to the San Benedetto wood in the Salerno area, a place he has been visiting since he was a child, and which over time has become a strong influence on his artistic research. This very wood is the star of the exhibition. The artist describes certain aspects of the place through the evocation of elements which, when de-localized, are moved to a place "other", to take on a new and singular aspect. The exhibition includes a group of twelve small drawings, made from life, on a white background, where berries, fruits and small branches are totally isolated from the context where they belong; the artist captures those elements which, although natural, for their particular shape look anomalous, therefore standing out from the rest of the landscape.

With the use of dry printing, three wall works evoke sections of oak trunks. An element extracted from tree stems is added to the paper mixture, creating a synthesis through which the matter of nature influences the result of the work.

Two sculptures made with soil-colored paper are placed along the exhibition path; they indicate two "Paths", one on flat land, the other uphill, both placed near a structure made with green sheets, hanging from a portion of the ceiling. This structure creates a rift in space, allowing the odd ray of light to pierce through, just as it happens in the denser areas of a wood, where light never fails to make its way through even small openings between the leaves. Finally, "Breath" is an installation which spreads out on a wall and consists of a multitude of lightweight sheets. The passing by of the viewers causes a slight and subtle movement, a sort of silent breath, the vibrant evocation of living and evolving nature.

The re-creation of the wood which Ivano Troisi carries out is not textual, but emotional: it is a synthesis of experience and memory. The exhibition is conceived as an emotional journey which dwells in the memory, materializing through different elements, diverse forms of expression for the purest interpretation of reminiscence which, maturing over time, has settled to become a real way of life.