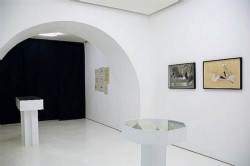 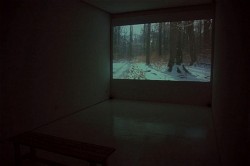 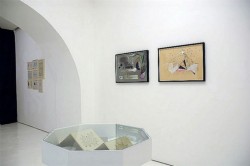 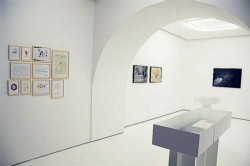 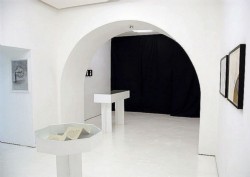 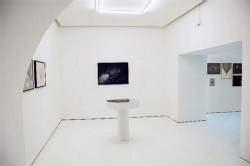 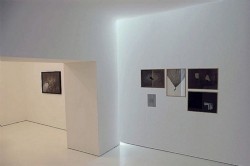 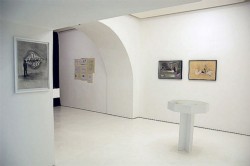 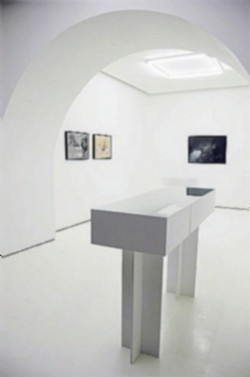 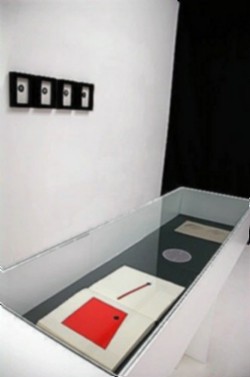 Video, sculpture, drawing, writing and music are the media used by this Croatian artist, whose works are populated by solemn characters and where all is pictured within complex environments recalling reality only in a few formal traits. The body of the works on show is very complex, packed with elements and completed by an allure which unfolds in various directions. The title of the exhibition is named after the video on show at the Gallery, The Age of Happiness, in which the artist analyses the differences in perception as a medium in the relationship between the human being and the reality in which he dwells, giving life to a structured system needed to analyze different elements from reality and to later relate them to each other.

A glass cabinet shows various kinds of works: a 280-page artists book connected with the video and containing a collection of graphic signs inspired by a sound coding system already in use in the Sixties by electronic music composers. Its formal aspect is rather abstract and contains a powerful sound source connected with The Age of Happiness, a sort of collection of signs which also have a story-telling function. A notebook of cuttings and collage work referring in particular to the first scene of the video, where a film shot progressively gets closer to the sun, unfocussed and disturbed by the blinding intensity of the light. A page containing a paradox by Renť Daumal, of special importance to the artist. The text here is graphically organized to look like a formal composition, where the word, the letter and the sentence take the place of the trait and the sign, in order to become themselves symbols and meanings. Another octagonal glass cabinet contains a schematic model with various elements from the film, such as the harmony based on the work of Alexander Nikolayevich Scriabin, or references to unusual musical instruments such as the glassharmonica and the ondes Martenot.

The whole project is completed by several series of drawings intended not as an appendix to the exhibition, but as an element explaining its structure. Drawing, which the artist intends as a tool to clarify the uncertainties that anyone may meet along their creative path, nevertheless keeps its own independence; each drawing features elements connected with reality, and although these are plunged in surreal settings, the flexibility of the means used for these works never jeopardizes sense and formal coherence.

The Age of Happiness is his first solo show in Italy.