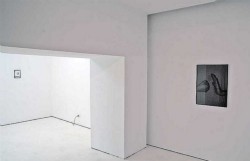 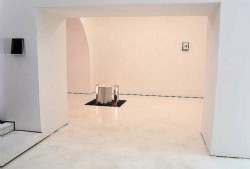 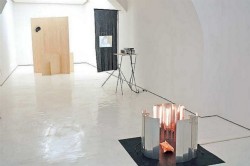 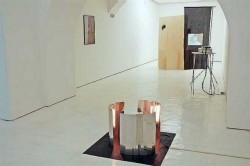 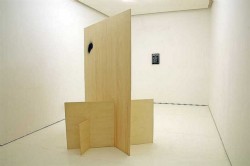 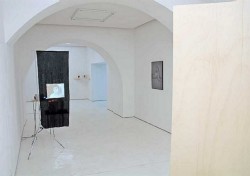 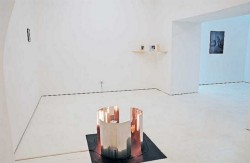 Galleria Tiziana Di Caro is delighted to open the first solo exhibition in Italy of Antonia Carrara (Rome, 1982), Thomas, opening Friday 18 May 2012 from 19.00.

What's in a name?

Thomas functions at once as a name and as a title, a character and an idea, a screen and a projector. Antonia Carrara composes the show with works - mostly realized in 2012 - that although employing different medias stem from a common multiple; a name, a possible body born through language, taking and changing shape in its reading. Thomas Mann, Thomas The Impostor, Thomas Bernhard, Dylan Thomas, Thomas Edison, Thomas The Obscure… Characters, interpreters, doubles that promise infinite stories and exclude others altogether, with the sole power of a name.

The name functions like an excuse, a code to assure anonymity. It allows the works of the exhibition to appear as clues, or as the silent presentiments that precede the reading and linger on. In this context, the content of each piece becomes a variable of intuition. The body of the exhibition recalls phenomenons of synesthesia. Through the interpretation of movements, gestures and visual constructions, the artist weaves a thread where the relation between the sensorial and the intellectual is constantly questioned - the impact between two hands (the diptych Certainly not. Against, 2011), the opening and closing of a stare (the video work Little resources he sailed, 2012), a stereoscopic vision(Proof that inadequate, 2012). The acts of listening, interpreting and vision are tricked by the work of memory. Carrara searches elements of the literary and poetical language, and transfigures them into the realm of the visual, constantly shifting from what cannot be articulated into language to very recognizable moments. All the titles of the works in the show are fragmented phrases from a short story by Franz Kafka, The Silence Of The Sirens (1917) - a text in which the visionary power of those mythical creatures is put to test to the inexhaustible potential of their silence, a promise of infinite knowledge.

What's in a name? How does a name change in that very moment when from written, it is being called?
The only natural element within the artworks, a conch (central item in the installation A Sort Of Shield, 2012), alludes to a site for reception and diffusion of a potential sound, to the possibility of sound - and speech. As Kafka imagines the power of the sirens in their silence rather than in their singing, Carrara investigates a gap of transformation, the subtle silent changes from one Thomas to the other.

Antonia Carrara (Rome, 1982) lives and works between Amsterdam and Paris, where she obtained an MFA at the Ecole Nationale des Beaux Arts.
Her sculptures, films and collages serve a dialogue between will and chance, knowledge and intuition, historical thought and irrational beliefs. Never purely formal or purely conceptual, Antonia Carrara's work inhabits a diverse and dynamic field of visual, literary and artistic allusions.
She has exhibited at De Hallen Museum in Haarlem, at Fons Welters Gallery in Amsterdam and at the Salon de Montrouge in France. She is also the co-founder of Rongwrong, a non-profit project space located in Amsterdam.